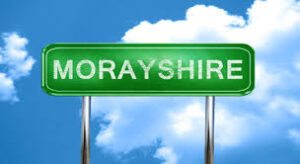 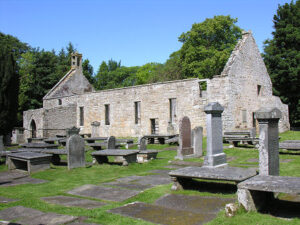 According to Local paranormal investigators this location was deemed worthy of an investigation and therefore was investigated on two seperate days.

The first day there was a feeling of being watched by two different spirits and one investigator felt he had seen a thin black shadow going from one side of the cemetery to one of the corners. Upon investigating this part of the cemetery one had a creepy feeling that they were not alone while they were there.

On the second day wile undertaking EVP a little old lady appeared and sat and chatted to investigators about the cemetery before she disappeared around the corner of the building.

You approach St Peter’s Kirk along a grassy lane that runs south from the minor road from Duffus. There is space to park on the north side of the road without causing an obstruction, or you can walk from Duffus. A sign on the inner gate tells visitors where the key to the church is is kept, though access around and views into the church are so good that many visitors probably choose to do without.

Much of the church you see today dates back to the 1700s, but its origins are ancient, and a church has stood on this spot since at least 1226. This depth of history explains why the church is today cared for by Historic Environment Scotland.

The origins of St Peter’s Kirk date back to the establishment of Duffus Castle, on a site 1¼ miles to the south east, in the mid-1100s. Castles were often accompanied by churches, and by 1226 a church dedicated to St Peter stood on the location of the church you see today. Around the church grew a village which today is known as Old Duffus. Sometime later a tower was built at the west end of the church, which probably reached a height of three storeys.

In 1524 the rector, Alexander Sutherland, oversaw the building of a rather fine porch on the south side of the church: his initials and coat of arms are engraved on the keystone at the centre of the vaulting in its ceiling. The outer door of the porch is surrounded by a strikingly pointed and highly decorated arch. The church seems to have continued to function as a place of worship through the disruption cased by the Reformation of 1560.

In the 1650s it is said that Cromwellian troops based in the area built a paved road around the church, in what at the time would have been the village of Old Duffus. No trace of this has been found in modern times. Sometime in the 1700s it was decided to rebuild what by this time was a 500 year old church. This was something that happened to many medieval Scottish churches when funds became available: sometimes to give the congregation something more weathertight, but more usually to provide a space more suitable to the needs of Presbyterian worship.

The new church retained the basic rectangular shape of its predecessor, but was arranged very differently. Whereas the original church would have had its focus at the eastern end, in the new church, everything revolved around the pulpit. This was placed, as is often the case in Presbyterian churches, mid way along the south wall. The pews on the ground floor would have faced in towards the pulpit from the east and west ends, and across the church from the north side.

Meanwhile, galleries were inserted at both ends and on the north side of the church. Today the external stairs that gave access to the north and east galleries still remain, and climbing them gives an excellent impression of the space available within the church. The church fell out of use after a new parish church was built in the “new village” of Duffus. in 1869.

The surrounding churchyard is fascinating and is heavily covered by grave markers. Just to the south of the church stands a stone shaft which, together with its massive stone plinth, measures some 14ft in height. This is the mercat cross (or market cross) of Old Duffus and is believed to date back to the 1300s. Its presence here is a reminder of an age in which it was common to hold markets in the churchyard if that happened to be the largest available space in the village or town.

Many of the grave markers carry the traditional emblems of mortality often found on Scottish gravestones from the 1600s and 1700s. The Christian cross was considered too “papist” by the post-Reformation Scottish Kirk, so until the 1800s, skulls, crossbones, angels, egg timers and other emblems stood in instead. Equally interesting are the emblems often used to represent the trades of those interred below.

In the churchyard here, some of the most poignant memorials are those carrying text. An especially interesting touch is the presence on some stones of engraved “guidelines”, faint straight lines above and below each line of text to ensure the mason kept his letters of even height and his lines straight. This has not prevented all error, however. A stone commemorating 7 year old Thomas Watson who died in September 1796, is carved in capital letters, and every “N” is carved backwards: while the “DID” on his stone has a small “e” superimposed to turn it into “DIeD”.

In one corner of the churchyard stands a watch house, with a date of 1830 inscribed above the door. In the early 1800s body-snatchers or “resurrectionists”, who stole freshly buried corpses for sale to medical schools, were a serious problem in Scotland. A number of countermeasures were used, including buildings in which to store bodies until they were no longer fresh enough to be of interest to body-snatchers; mortsafes placed over graves to prevent them being dug up; and watch houses in which a watchman would guard the churchyard when there were fresh burials. The watch house here is unlikely to have seen much use: The Anatomy Act of 1832 opened up a legitimate supply of corpses for medical study and research and body-snatching simply ceased. 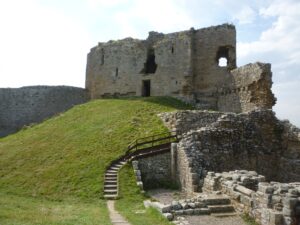 Investigations do not have to be at nightime and LPS has undertaken many daytime investigations in the past with some surprising results. At this location investigators did not pick up anything of note and were on the trail of the red headed woman sighted in 1996. Local investigators told us that Duffus Castle is also a hotspot for sighting UFO’s which is hardly surprising given the commanding view of the land.
we have included the following report from 1996 which was also a daytime sighting.

Duffus Castle, Near Elgin, 5th December 1996
Andrew Beaton.. in his own words

“Duffus Castle is situated some four or five miles North of Elgin, in a rural location, surrounded by fields and accessed by a single track road. A small car park for visitors lies just outside the castle boundary fence. The property is in the care of Historic Scotland and may be visited free of charge at any time. There are no staff on duty at the castle and interpretative material for visitors is provided via notice boards and sign-posting. Duffus is rather an impressive ruined, stone-built castle.

The present structure, uninhabited for at least two hundred years, is primarily of 14th century origin, though a Norman style wooden motte and bailey castle occupied the site from the 1100’s, when it was constructed by an Anglo-Norman settler, Freskin de Moravia, who had settled in Moray at the invitation of King David 1st. The lordship of Duffus later passed, through failure of the male line of Freskin, to the Sutherland family. It can also be noted that a son of the male Freskin line, Andrew Moray, gained fame as an associate of Sir William Wallace, dying from wounds received in the Battle of Stirling Bridge in 1297.”

“Generally however, the history of Duffus Castle would appear to have been fairly peaceful. My researches at Elgin reference library and at Aberdeen University Library have failed to uncover any hint of bloodshed or dastardly deeds of the sort which so often appear to be associated with hauntings. I shall therefore move on to a detailed account of the incident which befell my five year old daughter, Helen, at Duffus Castle on Sunday 5th of December 1996.”

“Living in Elgin and being a keen student of Scottish history, I have been a fairly regular visitor to Duffus, the castle also being popular with my two daughters, Helen and Mary (4). About 10.30hrs in the morning of December 5th, 1996, the three of us arrived at the castle for a visit – the kids love to play among the ruins. The weather was very cold and windy, but dry. Because of the weather I was in no mood to hang around, so we spent only about twenty minutes there. The kids and I, were the only visitors present the whole time we were there. I can confirm absolutely that no one else was either in or near the castle while we were there. The castle its self is not large, and there are scarcely any potential hiding places for a possible prankster, for example.”

“Likewise, the elevated position of the ruin with regard to the surrounding countryside makes it possible to clearly view the surrounding area for some miles. There was simply no one else around!”

“Anyway, after about ten minutes, I found myself standing at the flat grassy area which constitutes the castle bailey, (i.e.. yard area.) I was standing looking in the direction of the castle keep, I must have been about 120 metres away from it. My two daughters were playing at the foot of the motte, (mound on which the castle keep stands.) about 100 metres from me.

My eldest daughter Helen then ran across to me and said excitedly, (I quote her exact words.) “Dad, a lady waved at me from the castle”.

As I stated earlier, there was simply no other person in or near the castle and I realised pretty quickly the implication of what had been said to me. On questioning Helen, being very careful not to ask her leading questions, and not mentioning the possibility of having seen a ghost, I established that a women with a friendly face and ginger hair had waved to her from a hole in the castle wall.

I should add that I had been looking directly at the castle at this time and saw nothing, neither did my younger daughter Mary, who had been standing next to Helen.”

“Well, we left the castle soon afterwards, the hair on my neck standing up! To this day, I have never mentioned to Helen that she had probably seen a ghost – in any case she thinks that a ghost looks like Casper, and not like an ordinary human. I am absolutely convinced of her sincerity.

Some research at the local library has failed to shed any possible light on the identity of the lady, though a friend who lives locally to Duffus has heard that the castle is reputedly haunted, but could give no further details.”

“I hope that this account, unexciting though it is, will be of interest. I suspect that it may back-up the notion that young children, who are very reliable witnesses, can sometimes see things which adults cannot. I feel it is worth mentioning that at the precise moment when Helen saw her lady, I myself was day-dreaming, reflecting on the past history of the castle and those who had lived there.

I forgot to mention, Helen could not describe the lady’s clothes, only her head was seen……