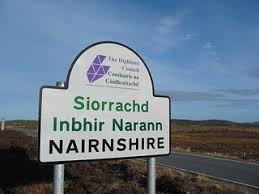 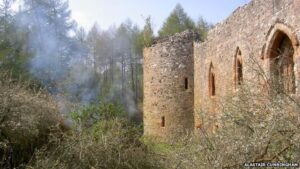 On a previous investigation in 2017 the sounds of battle were audible inside the tower of the castle. This time members investigated over two days with the following results.

During day one investigation during an EVP experiment inside the tower. The investigator called out for a name of any spirits present and an immediate response came back through giving a name that we were sadly unable to work out from the audio. A photograph taken of an upper window showed a bush that strangely gave the appearance of a bearded man of course this is just the angle of the camera and mother nature playing her tricks.

Day two the investigation was in the morning and the ruin was incredibly quiet. However, while walking around the outside of the castle wall one of the investigators passed by what used to be a window in the wall, he heard the sound “Wooo” coming directly at him from inside this window. The sound can only be described as if someone was shouting it from the other side of the wall but no one was there and the investigators checked out the castle for anyone else. The investigator repeated his movements, but nothing further was heard.

The story of the Rait Castle ghost is taken from George Bain’s “History of Nairnshire”:
“The story is to the effect that Cumming of Rait, under the guise of a desire to bury former animosities and establish friendly relations, invited the Mackintosh and his followers to a grand banquet at Raite. The invitation was accepted, and the Mackintoshes, never doubting, prepared to attend. They were, however, timely warned that the Cummings had planned a foul plot and that at a given signal each Cumming would rise and slay his defenceless guest. Old Cumming had put all of his household under a solemn oath that they would not reveal the plot to any person; but his daughter, anxious for the safety of young Mackintosh, who was her lover, found a way to disclose the plot. She went to a large boulder, some distance from the castle and told the whole story to the stone, but she knew her lover was behind it as it was their usual trysting place, and he would hear every word. The stone to this day is called ‘The Stone of the Maiden’.
The Mackintoshes, notwithstanding the warning, resolved to attend the feast. When the night of the banquet came, each Mackintosh hid his dirk in his plaid, but gaily took his seat at the festive board of Cumming of Raite. The revelry ran high, and the walls of the castle rang to the mirthful shouts of the carousers. At length the toast was given, “The Memory of the Dead”. This was the signal agreed upon for the slaughter of the guests. The Cummings rose and were about to draw their swords but the Mackintoshes, being forewarned, were forearmed, and with a yell of derision, sprang to their feet, drew their daggers and thrust them into the hearts of the Cummings. Among the few who escaped death, it is said, was the chief of the Cummings, who rushed to an upper chamber where his daughter was, whom he believed to have given the information, as he knew the girl and the young Mackintosh were lovers. Seeing the maddened state of her father, the young lady sought to escape from him by leaping out of the window, but before she could do so, he cut off both of her hands with a broadsword. From the night on which the tragedy was enacted, the bloodstained walls of Raite have been tenantless.”

The story locally is that a girl with no hands still haunts the ruins.